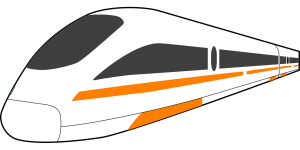 In March 2017, construction has been underway for the last couple of years for the California High-speed rail. They are working on more than 119 miles of the system from Silicon Valley to the Central Valley, with expected passenger service in 2025. A timeline for building south to Anaheim has not yet been determined, but passenger service is scheduled to start in 2029. Phase 2 would connect Los Angeles Union Station to San Diego and Merced to Sacramento.

The projects current $9.4 billion in federal money, state money and bonds might be enough to complete 119 miles of the rail line from Madera to the north of Bakersfield. It is not clear that they can complete that section around 2020-2022 with the existing money. And even more uncertain to complete electrical power systems, signals or to buy trains. That section would definitely be vastly unprofitable and would not be able to pay back the bonds.

The original plan pitched to bond voters as focusing on Los Angeles to San Francisco, was replaced with an initial 32-mile segment under construction between Fresno and Madera counties.

The project is supposed to open in legs. The first, connecting San Jose to the Central Valley, is scheduled to begin passenger service in 2025. Stops along this leg will include San Jose, Gilroy, Merced, Madera, Fresno, Tulare County, and Bakersfield.

The second leg, expected to open in 2029, will build out tracks from San Jose to San Francisco’s Transbay Terminal, including a Peninsula stop in Millbrae; and south from Bakersfield to Anaheim, with stops in Palmdale, Downtown Los Angeles, and at Burbank Airport.

The proposed timeline on the later extensions of the project is to add a 110-mile Sacramento extension, connecting to Modesto and Stockton on its way, and a 167-mile segment that snakes east from Los Angeles through the San Gabriel Valley to the Inland Empire, and eventually down south to San Diego.

The High-Speed Rail Authority officially broke ground on the project in Fresno back in early 2015. Since then, construction crews have been working on a 119-mile segment of track in the Central Valley. For now, this means building out the track’s right of way and its necessary bridges, trenches, and under crossings.

An unreleased Federal Rail Administration risk analysis from earlier this year said the project was running significantly over budget and behind schedule.

The train is a frequent target for more sweeping legislative change on the state level. A statewide ballot proposition last November not-so-subtly targeted the train by proposing a constitutional amendment to require voter approval for “megaprojects” costing more than $2 billion. Another potential amendment on the ballot next June could derail one of the train’s funding mechanisms.

The Tutor Perini group was awarded a contract of about $1 billion for the Fresno-Madera construction segment in mid-2013. It was the first of three contracts that have been awarded, totaling nearly $3 billion, to build about 119 miles of the rail line from Madera to the north of Bakersfield.

A separate contract was awarded earlier in 2013 for Caltrans to handle the relocation of Highway 99. At that time, the two state agencies agreed on a price of $225.9 million for shoving the highway lanes west by about 100 feet between Ashlan and Clinton avenues through central Fresno and rebuilding several overpasses and interchanges.

Three years on, it’s going to cost an extra $35 million for the state Department of Transportation to fulfill its obligations. And changes to the contract are expected to push the schedule from its original completion deadline of June 2018 to December 2018.

Caltrans also experienced difficulty in acquiring the property it needs for the work.

Any spending from the bonds, which are taxable for investors, must be matched with money from other sources. As of April 2017, the project has $3.5 billion in federal grants and $1.2 billion in state greenhouse gas fees. That would give the rail authority a budget of roughly $9.4 billion for the Central Valley work and commitments made to do early work on the Southern California and Bay Area segments.

The Central Valley cost alone is officially estimated at $7.6 billion, though the Federal Railroad Administration estimated in December that the cost could reach $10 billion, meaning the state could have to scramble to find extra money.

The bond funds are critical to current construction efforts in the Central Valley. They would help finance about 118 miles of construction from Madera to Shafter, not including electrical power systems, signals or trains.

Phase 1 from San Francisco to Los Angeles and Anaheim is estimated to cost $64.2 billion to build and funding has yet to be identified for the entire scope. Part of it would be covered by system revenues. The train is expected to pay for itself once it’s built, with revenues taking care of all operations and maintenance costs, as is consistent with similar systems internationally.

Fares are expected to average $89 from San Francisco to Los Angeles or Anaheim, and $30 for a trip from Los Angeles to Anaheim, according to the rail authority’s 2016 business plan based on 2015 dollars.

Assembly Bill 1008 made its way from the Assembly through the Senate and now awaits action from Governor Jerry Brown.
Prohibition Against Pre-Offer Inquiries Regarding Applicants’ Conviction History
The bill would make it unlawful under California’s Fair Employment and Housing Act (“FEHA”) for an employer with five or more employees to inquire about or consider an applicant’s conviction history until the applicant has received a conditional offer of employment. Under the bill, an employer would be prohibited from:

Before making a final decision, an employer must provide the employee at least five days to respond to the preliminary decision. If the applicant notifies the employer that he/she disputes the accuracy of the of the criminal history report and is taking steps to obtain evidence to support that assertion, then the applicant has five additional business days to respond. The employer is required to consider information submitted by the applicant during this time period in reaching its final determination.

If an employer makes a final decision to deny an applicant a position for any reason related to the applicant’s conviction history (after engaging in individualized assessment, informing the applicant of its preliminary decision, and providing due time and consideration of an applicant’s response), the employer must provide written notice to the employee. The notice must include the following information:

The bill does not apply to the following positions: (1) a position for which a state or local agency is otherwise required by law to conduct a conviction history background check; (2) a position with a criminal justice agency as defined by the California Penal Code; (3) a farm labor contractor as defined by the California Labor Code; and (4) a position where an employer is required by state, federal, or local law to conduct criminal background checks for employment purposes or to restrict employment based on criminal history.

Governor Brown Has Another Opportunity to Expand Parental Leave to Small Businesses in California
The New Parent Leave Act has made it to Governor Jerry Brown’s desk awaiting his signature or veto. This bill would mean a significant expansion of parental leave for small employers in California. It is uncertain whether Governor Brown will sign the bill into law after vetoing a similar bill almost a year ago.

The New Parent Leave Act would require businesses with 20-49 employees within a 75 mile radius to provide 12 weeks of unpaid leave to eligible employees after the birth of a child, adoption or foster care placement. Eligible employees must have more than 12 months of service with the employer, and at least 1,250 hours of services during the previous 12 months of employment. Currently, employers only must provide such leave if they employ 50 or more employees.

Under this bill, employers must guarantee employment in the same or comparable position upon conclusion of the leave. While otherwise unpaid, the New Parent Leave Act would require employers to maintain an employee’s medical benefits during the leave. Employees may use accrued vacation pay, paid sick time or other accrued time off during the parental leave.

The previously vetoed bill provided six weeks of parental leave. In vetoing last year’s bill, Governor Brown noted the impact the bill would have on small businesses. Governor Brown wrote: “I am concerned, however, about the impact of this leave particularly on small business and the potential liability that could result. As I understand, an amendment was offered that would allow an employee and employer to pursue mediation prior to a lawsuit being brought. I believe this is a viable option that should be explored by the author.”

Not surprisingly, one of the bill’s amendments includes a proposal of a mediation pilot program for parental leave-related claims. The California Department of Fair Employment & Housing (“DFEH”) would administer this pilot program through January 1, 2020, upon receiving the necessary funding. Under the program, an employer may request that the parties participate in the DFEH’s Mediation Division Program. Employers would have to make this request within 60 days after receiving an employee’s right to sue notice from the DFEH. Employees would not be able to bring a lawsuit until the mediation is complete.

Time will tell whether the mediation program alone will be sufficient to address Governor Brown’s concerns regarding the impact on small businesses. If the New Parent Leave Act becomes law, it will present challenges for small employers. As an initial step, affected employers should consider updating their employee handbooks and/or policies to address parental leaves.