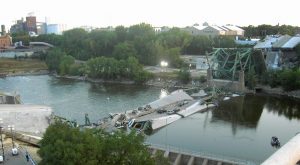 President Trump spent much of last week touting his $1 trillion plan to boost the nation’s infrastructure and the : its vast networks of highways, bridges, waterways, airports, railroads, power lines and such.

But after hearing everything the president had to say, longtime advocates of more public spending on such traditional public works are asking: Where’s the concrete?

“There’s a profound dearth of details…”

“There’s a profound dearth of details, especially when you’re talking about what’s supposed to be a trillion dollar initiative,” said Casey Dinges, senior managing director at the American Society of Civil Engineers.

Rep. Brian Higgins, D-Buffalo, for years has been pushing a $1.2 trillion, five-year investment in American infrastructure. He argues that such a federal investment could lead to a new Peace Bridge Plaza, a renovated DL&W Terminal and the possible expansion of Buffalo’s light rail system, among other local projects.

But Higgins sees nothing like what he has proposed in Trump’s plan. Instead, Trump unveiled a $200 billion plan to jump-start public-private infrastructure partnerships and a host of regulatory changes that left experts in rebuilding America’s aging infrastructure yearning for more.

Dinges’ organization recently issued a quadrennial report card that rates the condition of America’s infrastructure at a D+. The group says the nation must make more than $2 trillion in investments over the next decade just to get its transportation network and other key inner workings – the power grid, water pipelines and the like – up to a state of good repair.

Both Trump and the nation’s leading Democrats have promised a big investment in such projects for more than a year. That fact prompted many in Washington to think that a bill focusing on big public works projects could be one of Trump’s first major accomplishments as president.

Instead, Trump, last week rolled out something much more piecemeal.

First, he revived a controversial proposal to privatize the air traffic control system. Then he announced a plan to improve the nation’s waterways, and on Friday introduced moves to reduce the red tape surrounding the nation’s infrastructure projects.

All the while, he talked like he was about to make America’s infrastructure great again.

“Americans deserve the best infrastructure anywhere in the world,” Trump said Friday. “They deserve roads and bridges that are safe to travel and pipes that deliver clean water to their homes – not like what happened in Flint, Michigan. They deserve lanes of commerce that get people and products where they need to go on time. Most of all, Americans deserve a system of infrastructure that is looked upon not with pity – the world, in many cases, is so far advanced that they look at our infrastructure as being sad. We want them to look at us with envy – a system worthy of our magnificent country.”

“President Trump has a clear vision when it comes to improving our nation’s infrastructure, and I look forward to working with my colleagues in Congress to implement it,” said Collins, noting that it’s up to Congress to turn Trump’s principles into legislation. “His plan will create jobs, boost the economy, focus on public-private partnerships, and roll back regulations.”

The Republican from Clarence sounded especially excited about the plan Trump announced Friday to curb regulations that slow down highway projects, which sometimes take upward of 10 years to complete.

The problem is, the infrastructure plans Trump unveiled so far also alienated Democrats whom he will need to help him pass any major public works bill in Congress.

“When he called for a trillion-dollar infrastructure bill, we thought that was great,” said Senate Minority Leader Charles E. Schumer, D-N.Y. “What they’ve proposed is privatizing most of our infrastructure to give wealthy financiers tax breaks on projects they were probably going to build anyway … It’ll lead to ‘Trump tolls’ from one end of the country to the other.”

Schumer was referring to the $200 billion in tax breaks Trump proposed in hopes of sparking $800 billion in private-sector investment in infrastructure projects.

Such public-private partnerships have financed a toll road through Washington’s suburbs to Dulles International Airport and special high-speed toll lanes on interstate highways near the capital city and in other major metro areas.
That is not how Collins sees it.

“Public-private partnerships will bring jobs to our region and are beneficial when it comes to meeting the specific needs of our communities,” Collins said.

So far, though, such public-private highway projects are largely unheard of in Buffalo and many other metro areas as well as in rural America. There, some experts say, no system of tolls ever would be enough to make the private sector want to build a profitable toll road or bridge.

“When it comes to infrastructure, you have to have a lot of tools”

“When it comes to infrastructure, you have to have a lot of tools,” Pattison told CNBC. “You have to use public-private partnerships. You need more resources and monies. You need to issue bonds. You just need all kinds of tools available in the toolbox so the states and localities can use what works best for them so we can fix those bridges, fix the water systems and all the other infrastructure problems we’re seeing across the nation.”

Yet while proposing more public-private partnerships, Trump’s proposed fiscal 2018 budget actually cuts some of the alternate funding sources Pattison cited. The spending plan eliminates the TIGER grant program that was used to return cars to Main Street in Buffalo and cuts funding for other highway programs, public transit, and Amtrak.

In total, the Wharton Budget Model, a bipartisan research outfit at the University of Pennsylvania, found that Trump’s budget actually trims traditional infrastructure spending by $255 billion over 10 years.

“The full Trump budget would be an unprecedented disaster for public investment,” Hunter Blair, a budget analyst at the liberal Economic Policy Institute, said in a blog post last week.

The Highway Trust Fund is, in effect, running on fumes, 24 years after Congress last increased the gas tax that funds it.

For Congress, though, the Trump budget would only further an ongoing trend away from spending federal money on big public works. Highway funding bills, which two decades ago proceeded quickly through Congress with bipartisan support, now expire as Congress battles over how to renew them. The Highway Trust Fund is, in effect, running on fumes, 24 years after Congress last increased the gas tax that funds it. And Higgins has never been able to persuade any more than two of his colleagues to sign on to his big infrastructure bill.

Higgins blames such stalemates, in part, on the Republican Congress and its 2011 decision to eliminate “earmarks,” the local pork-barrel projects that lawmakers could show off to their constituents. While they rarely constituted more than 5 percent of any infrastructure bill, earmarks served as the grease that made the legislative gears turn, Higgins argued.

But a controversial “bridge to nowhere” fueled opposition to earmarks. And even today, Dinges, of the civil engineers, said he hears more people talking about that bridge to nowhere than about the interstate bridge that collapsed in Minneapolis 10 years ago, claiming 13 lives.