“I needed another plan.”

After realizing that a lifelong dream of a career in the NFL was not going to happen, John Jones, then eighteen, began an apprenticeship program in the Skilled Trades to become a plumber and an example of our philosophy: “Train. Build. Succeed.”

The ‘traditional’ route, attending college, did not seem the correct fit. John needed to work with his hands and to be active rather than sit at a desk all day with a textbook.

Other options were indeed possible and before long, John was working as an apprentice plumber during the day and advancing his career at trade school a couple evenings a month.

A Career in the Trades

A career in the trades allowed John to purchase his first truck by the age of 19, his first house three years after that and, before long, to become his own boss as a small business owner – Custom Plumbing of Redding, CA.

Being a business owner provides John and his wife, Michael, peace of mind. They control their own destiny. Together, they have the financial stability and freedom to enjoy life and often venture into the wilderness to camp, hunt or fish – when they want. 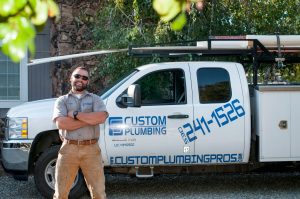 Active in the community, John now ‘pays-it-forward’ as an advocate for apprenticeship programs within the Trades, as a mentor for young people stepping up to the Trades, as an instructor of the Trade School at Shasta Builders’ Exchange, and by encouraging other Tradesmen to join the movement to return trades training to high schools.

“Right now, the big challenge is to find younger individuals who consider this [the Trades] as an option. I think it is because they don’t know it is an option,” states John.

As the Boomers and older generations retire, men and women of the Skilled Trades will find themselves in very high demand!