The Silent Dangers of Confined Spaces 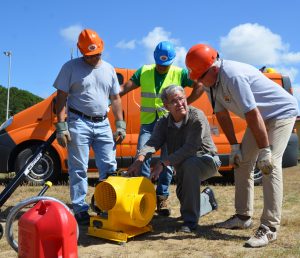 The Silent Dangers of Confined Spaces

Workers tend to put their faith in most indoor and confined spaces atmospheres, thinking someone else has checked for safety. Air, whether life sustaining or killing, is usually colorless, odorless, and tasteless. The atmosphere in a confined space, for example, may seem like any other. But that is one work place that must never be taken for granted. Confined spaces have fooled scores of workers killed or injured every year because they thought someone had checked for safety or because they “followed their noses” and guessed the air smelled OK. The air may look safe and smell safe, yet be filled with enough toxic contaminants to kill.

Be on guard for a lack of adequate oxygen, for the presence of asphyxiates, toxic gases and vapors, and remember that all of these can be present at the same time. This is especially true in sewers, pipelines, manholes, storm drains, tunnels, vaults, chemical and oil tanks, storage bins, farm silos, winery tanks, and brewery vats.

There are no set rules to avoid trouble in these confined places, because there are so many different types of hazards and kinds of toxic materials. Begin the safety check by knowing the substances that have been stored in the confined place and the processes that were most recently used there. It is important to understand the space’s use, whether for storage, fermentation or mixing. These facts will determine how to correctly test the space for safe entry.

Employers should have a “qualified person” determine if a confined space exists at the work site. This person should be able to identify the hazards workers may face in the space and be familiar with instruments and procedures to test for oxygen levels, flammability, and exceeded limits of air contaminants or toxic substances.

Before allowing worker entry, the confined space should be tested from the outside to determine whether the confined space atmosphere is safe. The qualified person should decide on the necessary tools for safe work in the confined space. (Explosion-proof tools and equipment are essential if the atmosphere is combustible.) The confined space should be continuously monitored to determine whether the space has changed due to the work being performed. If testing can’t be done continuously, it should be done often enough to ensure that the space doesn’t get dangerously contaminated or lack oxygen. Monitoring should be done with one instrument for lack of oxygen and another instrument for toxic and combustible hazards. Testing instruments should be regularly calibrated noting maintenance checks. The qualified person must also determine what type of ventilation should be used to draw air out of and blow fresh air into the space.

Never rush into a confined place to rescue a worker overcome by a poisonous atmosphere unless you’re wearing approved safety equipment, self-contained breathing apparatus, and a safety belt and line. A dangerously low level of oxygen or the presence of toxic vapors and gases affects everyone, including those with the best of motives. Thoughtlessness and panic help no one, not even the selfless hero.

While observing precautions, it’s also wise to periodically re-check the air after working in a confined place for any length of time. Following the rules of safety can safeguard against the silent dangers of confined spaces.

The above evaluations and/or recommendations are for general guidance only and should not be relied upon for legal compliance purposes. They are based solely on the information provided to us and relate only to those conditions specifically discussed. We do not make any warranty, expressed or implied, that your workplace is safe or healthful or that it complies with all laws, regulations or standards. Provided by State Compensation Insurance fund.