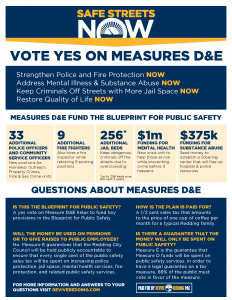 Think back over the last couple years and consider how much the increase in crime has cost you. We are already paying a public safety tax in the form of vandalism, theft, private security, fencing, lighting, cleanups, etc.

I grew up in West Redding where I walked to school and remember riding my bicycle into town to the arcade. My friends and I would leave our bikes out front and they would be there when we returned. My parents didn’t have to worry about us being harassed by a transient or stumbling across needles. I am now the father of a three year old munchkin and I would like her to have the same level of safety I had growing up. Redding is an amazing place to raise a family and I am confident we are simply in a slump that we can pull out of.

We had an opportunity to properly fund public safety two years ago with Measure F. However, there wasn’t much time to educate the community on what it was and while it received more than 50 percent of the votes, it did not pass with the two-thirds majority required for a special tax.

Measures D will only require a simple majority to pass. The concern among the community is whether we can trust that the $11 million a year will be spent as outlined in the Blueprint for Public Safety. That’s where Measure E comes in. A five-person citizen’s advisory committee will hold our city council accountable and ensure every penny is spent properly.
Trust seems to be the only major concern. Dozens of community leaders, including me, have spent countless hours putting these measures together, developing the Safe Streets NOW campaign and creating awareness. If, in this effort, I suspected the current or future city council would finance anything other than public safety services with these funds, I would not be volunteering my time.
We cannot sit with doubt and beat this to death with discussion. Imagine what $11 million would do for our local law enforcement. We need to do something now. We need to vote “yes” on Measures
D and E for safe streets now.