For Redding architect Les Melburg, a riverfront parcel on Park Marina Drive has evolved from his childhood swimming hole to the view from his office. But it’s what the land could become next that really gets Melburg excited.

“I see that little circular piece of existing land, and I thought, ‘I wonder if I could make something fit there?'” Melburg said Tuesday.

Melburg and his partners at Nichols, Melburg & Rossetto want the parcel to become a facility for science, technology, engineering and math (known colloquially in the education world as “STEM”) — so much so that Melburg’s already drawn up plans for the Shasta County Office of Education and other potential partners to consider, free of charge. 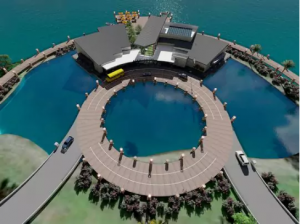 The proposed STEM facility may be geared toward students — complete with an IMAX-style planetarium — but Melburg also sees it as a mixed-use community asset with public access to the waterfront and a boardwalk, he said.

Buoyed by scenic bluffs and the Sacramento River, the land for the proposed project owned by the Kutras family is often heralded as the key to the city’s untapped tourism and commercial success.

“It’s the perfect flagship project for Park Marina development,” said Redding City Councilman Adam McElvain, who knew of the proposed facility even before he was elected to the City Council. “The people in Redding have been waiting for decades to see our riverfront utilized.”

The land is leased to the McConnell Foundation until 2020. Chris Kutras said he’s definitely interested in the project, but it’s too early to say what will end up happening.

“We’re going to be involved in some way,” he said. 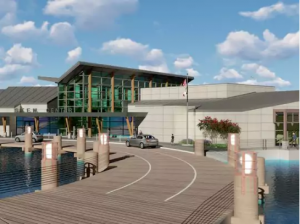 But while the Shasta County Office of Education is the one that started looking into where and how a Redding STEM facility could operate, SCOE officials now caution that any involvement on their part is uncertain because of the financial obstacles a new facility would bring.

“We’re just not in a place to really commit any stake in this,” SCOE Director of STEM Education Chris Dell said. “I’d love to see something like this happen, but I just don’t know.”

Dell said SCOE started looking into building a Redding STEM facility a few years ago, but the conversations got tabled because of various challenges. Melburg and Kutras reignited the idea with Park Marina as the backdrop, he said.

“It wasn’t that our board reignited this conversation; it was reignited by Chris Kutras and (Nichols, Melburg & Rossetto),” Dell said.  “It hasn’t been on our radar; it kind of was put on our radar.”

Melburg acknowledged the financial challenges of the facility that’s estimated to cost $8 million to $10 million to build, but said he’s hopeful and even confident that grants and major donors will present themselves.

“They don’t have a budget for this but I’m really certain that we can get corporate sponsorships,” Melburg said of SCOE. “This was something that could be bigger than all of us.”

McElvain had a similar attitude about the facility’s cost.

“You’ve got to start somewhere,” he said. “Hopefully the funding will come into place.”

Melburg said the project is subject to change based on the public vetting process any proposed facility undergoes.

To see a video of the proposed Redding STEM Center at Kutras Pond design, go to: https://youtu.be/Yv4o6q9QZ24

note: minor edits for format made by SBE Staff