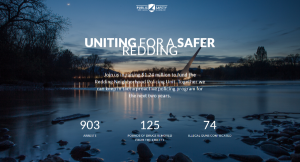 This campaign is following the Redding City Council’s unanimous vote on Tuesday to accept a $500,000 donation from Bethel Church to help fund the salaries over the next two years. Bringing together the people of Redding in support of our city’s future, the campaign is looking to our local community to raise an additional $740,000.

According to City Manager, Kurt Starman, the NPU has been highly successful over the past year. In his staff report to the City Council he quoted the white paper that the City Council received in February. The NPU has “worked with the District Attorney to compile cases against the operators of two of the city’s highest crime hotels in the downtown area. One of these hotels has been closed and the second is up for sale. Concurrently, they have worked several cases leading to the arrest of numerous illegal drug dealers.

In total the unit made 903 total misdemeanor (582) and felony (321) arrests and citations, seized 31 illegal firearms, and 43 other weapons.

This unit has supported businesses by working projects and attempting to intercede in the effects of negative criminal impacts in the Downtown and Hilltop/Dana Drive area…reduce[ing] the impact of career criminals on the community.”

The City of Redding needs many more stories like this, which is only possible with the support of a healthy public safety support system. To those who call Redding home, we need you and invite you to join in supporting the officers who risk their lives to ensure our safety.

The Redding Public Safety Campaign will reach out to organizations, business owners and the community at large in the upcoming weeks, encouraging locals to unite for a safer Redding. The Campaign has already received the support of We Back the Blue Shasta and Redding Merchants Crime Watch. We look forward to many others joining in this grassroots effort!

More than ever, now is the time for the community to take a stand and say that loss of public safety resources will not continue on our watch.

The purpose of the Redding Public Safety Campaign is to help the community draw a line in the sand in regard to the loss of public safety resources, and just as importantly, our reputation as a safe community!

The Redding Public Safety Campaign established a website at www.reddingpublicsafety.com. The website provides the opportunity to make a tax-deductible donation to NPU Fund through Advance Redding, a Public Benefit 501c3 non-profit. Additionally, donations for the NPU fund are being accepted at Cornerstone Bank located at 150 Cypress Drive.