The California Arts Council, tasked with setting up, reviewing and choosing the cultural districts, convened a panel in April 2017 to assess all submissions to the program. According to Caitlin Fitzwater, director of public affairs & interim program coordinator of the California Cultural Districts program, “It was a very competitive pool of applicants, and the panel’s evaluation of Redding Cultural District resulted in semi-finalist status being granted to the district.” 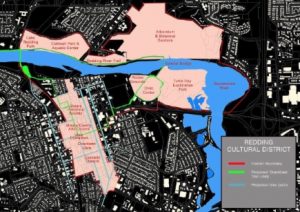 “We are very excited to advance to the next phase of the process,” Debra Lucero, Executive Director of Shasta County Arts Council (SCAC), said.

According to Lucero, SCAC is the lead agency in a six-partner team which includes VIVA Downtown, the City of Redding, Turtle Bay Exploration Park, Shasta Historical Society, and The McConnell Foundation. She said, however, many individuals and organizations contributed to the initial letter of interest – ranging from citizens to nonprofit organizations to business entities.

“We’ve been working on this concept and process for several months,” Lucero said. “Josh Cuthbertson, an architectural designer with Trilogy designed the map, others contributed to the document and still others assisted with the cultural mapping project (still in process) and others helped with proposed bikeways, paths, and connections to downtown.”

For more information and to follow updates, read the newsletter here.