Rally for Youth and Families

” in downtown Redding will kick off a three-year effort to improve lives in Shasta County through increased financial stability, job preparation and youth mentoring and enrichment.
The rally is scheduled Thursday, Oct. 27, 4-6 p.m. at Market Street Promenade. If raining, the event will move indoors to Shasta College’s downtown Health Sciences building, near the intersection of Market and Tehama streets.

The Rally for Youth and Families is sponsored by United Way of Northern California on behalf of the Prosperity Initiative, which seeks to address the impact of economic hardship on families in Shasta County.

Redding Mayor Missy McArthur is scheduled to kick off the event, which will include non-profit and youth leaders speaking on behalf of Prosperity programs. There will also be a special performance by the South Shasta County Children’s Chorus.

The goal of the rally is to mobilize community support for Prosperity’s programs that will benefit youth and families. A United Ways of California study last year showed that 30 percent of families in Shasta County are struggling to make ends meet.

The Prosperity blueprint was drafted as a community effort involving more than 100 individuals from the non-profit, government, faith and business sectors. United Way coordinated the effort in partnership with the County of Shasta. 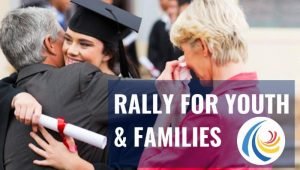 Prosperity’s financial stability programs would include NorCal Bank On, which would help low-income people access bank accounts and financial education; SparkPoint Resource Centers, which would serve as a one-stop center for a variety of financial services, and the introduction of a Semi-Annual North-State Workforce Forum, which would link job providers with transitional candidates seeking employment.

At-risk youth would be targeted by programs that link and grow existing youth mentoring programs; increasing funding for youth enrichment programs, and supporting crowdsourcing efforts that would fund enrichment opportunities for individual youths. Another program would introduce an interactive web portal, which would serve as a central hub for youth programs and services.

Funds will go to programs like the Shasta Family YMCA, which recently created Y Club, an afterschool teen enrichment and study program; and Catalyst Mentoring, which serves as a countywide hub for fostering mentoring relationships within our community.

UWNC has pledged to coordinate fundraising and implementation activities in support of the Prosperity Initiative. A three year-effort is envisioned, with a financial target of $300,000 per year. Initial funding commitments have come from the City of Redding, County of Shasta, Redding Bank of Commerce, Tri- Counties Bank and the United Way itself.