The Planroom at Shasta Builders’ Exchange: Year in Review 2017

As many of you have surely noticed, there have been quite a few changes in the planroom the past 12-14 months. Some of those changes have been well received and some… not so much. Below, I’ll recap the highlights.

The Online Plan Service had another banner year. Shasta Builders’ Exchange posted 595 projects and, as far as I can tell, this was a new record for us. Still, despite this solid performance, we’re only a part of a larger regional network that also includes Placer County Contractors’ Association, Nevada County Contractors’ Association, and Humboldt Builders Exchange that has posted over 3905 projects as a regional network since January 1, 2017. 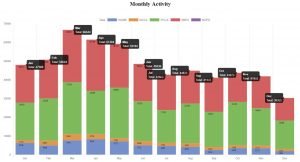 But it gets better. OPS subscribers also have access to our state network that includes the Coast, Valley, San Diego, and parts of greater LA. Adding those numbers to ours, SBE Total Access members had over 16120 projects available to them in 2017! Twenty-four hours per day. Seven days a week.

Our local contractors deserve some recognition for their level of engagement. We added 38 new companies to the Online Plan Service and Shasta Builders’ Exchange members are extremely active in the planroom. Check out the numbers!

Several years ago, before we helped to create the Golden State Plan Service, members of Shasta Builders’ Exchange paid hundreds of dollars for each of the various planrooms across the state to which they wanted access. Since then, we slashed that price, opened up the entire state to our members, provided access to thousands of additional projects, and moved all our project documents online so you can access them anywhere (and anytime) you have an internet connection. This massive upgrade is probably the best $2.40/week investment in your business and, for many of our members, this change also represents a savings of hundreds of dollars each year compared to just a couple of years ago.

Our plotter recently passed 1.4 million square feet of pages printed (about 30 football fields) and continues to be a productive workhorse more than 15 years into its career. Because of the age and volume of work, service calls, repairs, and part replacements have become more frequent and, as a result, effective January 1st, most wide-format print orders will be calculated at $1.25 per sheet (42” sheets will cost $1.50 each). We’ve called around to other exchanges and area printers and I’m fairly confident that this price change still reflects the best value per page for our members in the North State.

As you know, this past spring we retired the printed version of the SBE Weekly and began production of a color PDF version of the Weekly. Converting a 20-page newspaper to a 50-90 page electronic document with working hyperlinks was a bit more challenging than I had hoped but I think we’re close to what we originally envisioned.

This change allowed us to deliver the SBE Weekly to more than five times as many people as the printed version but at less than 1/100th the price we were paying a year ago. Current and back issues can be accessed at https://www.shastabe.com/tool-box/sbe-weekly/