Movies in the Park 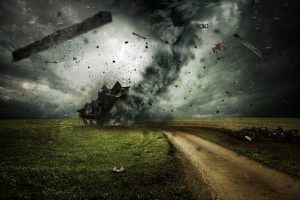 Bill and Jo Harding, advanced storm chasers on the brink of divorce, must join together to create an advanced weather alert system by putting themselves in the cross-hairs of extremely violent tornadoes.

From Wikipedia: Twister is a 1996 American disaster film starring Bill Paxton and Helen Hunt as storm chasers researching tornadoes. It was directed by Jan de Bont from a screenplay by Michael Crichton and Anne-Marie Martin. Its executive producers were Steven Spielberg, Walter Parkes, Laurie MacDonald and Gerald R. Molen. Twister was the second-highest-grossing film of 1996 domestically, with an estimated 54,688,100 tickets sold in the US.[1]

In the film, a team of storm chasers tries to perfect a data-gathering instrument, designed to be released into the funnel of a tornado, while competing with another better-funded team with a similar device during a tornado outbreak across Oklahoma. The plot is a dramatized view of research projects like VORTEX of the NOAA. The device used in the movie, called “Dorothy”, is copied from the real-life TOTO, used in the 1980s by NSSL.

One of the North State’s most popular and well-attended events of the summer. Join us every Friday night June – August, in our regional Redding, Anderson and Red Bluff parks for a night under the stars – remember to bring your blankets, lawn chairs or picnic baskets – or enjoy our onsite food vendors – enjoy this wholesome community activity.