If a Chico-based developer ends up buying the Americana Lodge, rehabbing the downtown motel will fall into the hands of local builder Josh LaFrance. 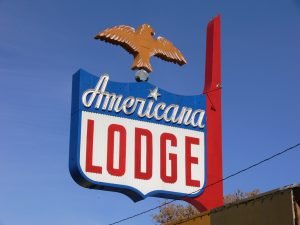 LaFrance and his wife, April, moved from Portland, Maine, to Redding seven years ago and started Woodstone Construction.

The Hignell Companies, based in Chico, announced earlier this week that it has purchased Woodstone and rebranded it Experts in Your Home. Josh LaFrance will run Hignell’s Redding operation.

It has been Hignell’s desire to expand into Redding for some time, and CEO Philip Larios said Woodstone is a good fit, sharing the same focus on quality and community as his company. It was the LaFrances who suggested to Larios to check out the Americana.

“Josh and April said, ‘Hey, did you ever consider doing something like this?’ “ Larios said.

Josh LaFrance said being part of the Hignell Companies team is a huge opportunity.

“Their 69 years in business is what attracted us, so the thought of partnering and getting after other projects, and downtown revitalization has always been something April and I have been passionate about,” he said.

Bethel Church introduced the LaFrances to Redding and they have been involved in the community since arriving. April LaFrance founded the Safe City Project in 2014, a citizens-led panel that came up with 11 proposals to help reduce crime in the community.

Meanwhile, Hignell Companies continues its due diligence on the Americana Lodge. It has a purchase offer of $375,000 and escrow could close in mid-March.

Over the past few days, Larios has come up from Chico to meet with city officials, local Realtors, Bethel Church and the LaFrances.

The vision is to redevelop the Americana Lodge into multi-family housing, focusing on units for college students. There’s also been talk of adding a commercial component to the development. But Larios is questioning that strategy.

“If you walk two blocks over to the south, you see a lot of empty commercial buildings and units,” Larios said, referring to Market Street Promenade. “So I don’t know if commercial is the answer.”

There also is a vacant lot on the northeast corner of Shasta and Market streets that has been empty for more than 25 years.

“We want to bring life to the area,” Larios said. “There are a lot of vacancies right now in that world in Redding. From my perspective, if we can build and fill residential units, maybe that is the option.”

Of course, Larios’ observations come as the city works to update its Downtown Specific Plan (view the PDF).

A day after a group of Redding residents practically took over the Redding City Council meeting, emboldened by their criticism over a redesign of the city flag, business leaders hosted a public forum at the Red Lion Hotel that discussed ways to grow our economy.

Given what transpired the previous evening, I was expecting Wednesday’s forum to be more animated. The room was nearly full with some 80 people, a cross-section of residents, business owners and community leaders.

But the two-hour forum was pretty straightforward. Development Services Director Larry Vaupel, Building Official Jim Wright and Planning Manager Paul Hellman answered questions that they had received beforehand before taking questions, which were delivered on index cards to the moderator.

Tuesday’s City Council meeting, however, was still on the mind of Vaupel, who mentioned it while talking about ways to leverage Redding’s assets to trigger more economic development. Vaupel urged people to take to social media. He uses it to show and tell friends and family why he believes Redding is a beautiful place.

“I think we all can do that,” Vaupel said. “That perception of our town, how others see our town is reflected in how we talk about ourselves.”

Vaupel paused for a moment before he asked the audience: “Did anybody go to the City Council meeting last night? I promised myself I wouldn’t go there.”

Focus more on the positive and less on the negative and that will help attract more people and jobs here, Vaupel said.
Joe Chimenti, executive director of the Shasta Builders’ Exchange who moderated the event, said he was pleased the evening took a civil tone.

“I wanted the message to be delivered,” Chimenti said. “I wanted them to hear Larry and that he brings a cultural shift.”

One of the first questions Vaupel’s crew received from the audience was why they think Redding has this reputation of being anti-business and anti-development. Vaupel, who’s been on the job since October 2015, said he can’t speak to the past. His department is working to streamline the permitting process and is open for business.

Jake Mangas, president of the Redding Chamber of Commerce, said the forum met his expectations.

“We actually experienced the same civil decorum during the (election) when we did our two (candidates’) forums,” Mangas said. “I was actually expecting it to be as respectful as it was.”

Next up will be a similar event featuring Shasta County’s Planning Department. A date has not been set.