On Wednesday January 18, 2017, Shasta Builders’ Exchange co-sponsored (in collaboration with Shasta Voices and the Greater Redding Chamber of Commerce) “Developing Our Economy”, a development forum that brought together concerned members of the construction trades, area business leaders, and other are residents for a constructive conversation with key representatives of Redding’s planning, development, and building departments. 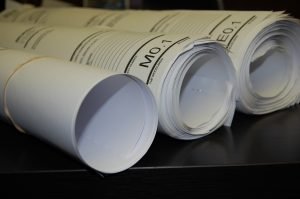 Don’t let the past dictate the future.

Vaupel, who came from San Bernardino County in October 2015 to take the job, said his department is open for business.

After answering a series of questions from the event organizers, Vaupel was asked about why he thinks Redding has a reputation for being anti-development and anti-business.

“I understand from hearing the stories it hasn’t always been easy,” Vaupel said. “Maybe that was just a busy time where we didn’t have the time to meet with folks before they purchased a building. I can’t really speak to that. All I can say is moving forward I think we kind of laid out our vision of how we want it to be and we can’t do that on our own.”

Questions from the audience were submitted via index cards that were read by the night’s moderator, Shasta Builders’ Exchange Executive Director Joe Chimenti.

Wednesday’s free forum drew about 80 people who braved the wind and rain to show up at the Red Lion Hotel on Hilltop Drive. They included community and business leaders.

Titled “Developing Our Economy,” the event was co-hosted by the Shasta Builders’ Exchange, Redding Chamber of Commerce and Shasta VOICES, a business advocacy group. The idea came after talks with business leaders about the 2016 election and how local candidates talked about the obstacles in the city and Shasta County planning departments.