Throw Back Thursday – December 1, 1990: Channel Tunnel sections started from the United Kingdom and France meet 40 metres beneath the seabed.

The Channel Tunnel (also nicknamed the “Chunnel”) is a 31.4 mi rail tunnel linking Folkestone, Kent, in the United Kingdom, with Coquelles, Pas-de-Calais, near Calais in northern France, beneath the English Channel at the Strait of Dover. At its lowest point, it is 250 ft deep. At 23.5 miles, the tunnel has the longest undersea portion of any tunnel in the world, although the Seikan Tunnel in Japan is both longer overall at 33.46 miles and deeper at 790 ft below sea level. The speed limit for trains in the tunnel is 160 kilometres per hour (99 mph). 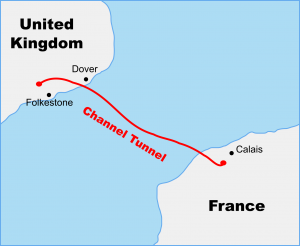 The Channel Tunnel, aka “Chunnel”, connected under the sea in 1990

Ideas for a cross-Channel fixed link appeared as early as 1802, but British political and press pressure over the compromising of national security stalled attempts to construct a tunnel. An early attempt at building a Channel Tunnel was made in the late 19th century, on the English side “in the hope of forcing the hand of the English Government”. The eventual successful project, organised by Eurotunnel, began construction in 1988 and opened in 1994.

On 1 December 1990, Englishman Graham Fagg and Frenchman Phillippe Cozette broke through the service tunnel with the media watching. Eurotunnel completed the tunnel on time, and it was officially opened, one year later than originally planned, by Queen Elizabeth II and the French president, François Mitterrand, in a ceremony held in Calais on 6 May 1994.

Story and images via Wikipedia at https://en.wikipedia.org/wiki/Channel_Tunnel